A good broth is a beautiful thing – a magical culinary elixir that extracts the hidden goodness from bones and other kitchen scraps… Food that would otherwise go to waste, but that still has deep flavor and powerful nourishment to offer.

Broth is an ancient food. It’s been around as long as people have boiling food in water. Long-simmered stocks made from vegetables, meats and bones have a history of recognition for not only their culinary value, but also their nutritive merits. Humans have a long tradition of strengthening weak constitutions with broth, from its use by early nutritionists as an inexpensive protein-sparing diet staple for the malnourished, to everyone’s favorite cold remedy – chicken soup.

The primary protein extracted in broths made from animal bones is collagen (a large protein which breaks down into smaller peptide subunits of gelatin, formed from amino acid building blocks with a high proportion of glycine and proline residues). In early years of modern nutrition science, when research focused on identifying which components of foods were essential to growth and survival, gelatin was concluded to be a “poor quality” protein due to its deficiency in several essential amino acids. Man cannot live on broth alone. But a growing body of research supports a positive nutritional role for collagen-derived proteins as a food/supplement.


Reports like these have fueled renewed attention and reverence for bone broth in popular nutrition culture. In typical fashion, public commentary ranges from earnest enthusiasm, to rabid sensationalism, to bitter skepticism. On the latter end of the spectrum, a common thread among mainstream health professional critiques seems to be a dismissal of claims that dietary collagen proteins can directly impact tissues, citing as common knowledge an understanding that proteins are broken down into their amino acid building blocks before they are absorbed in the intestine. This would support an argument that dietary collagen/gelatin would have no inherent benefit over a general balanced diet adequate in essential amino acids. But this common assumption about protein digestion and absorption seems to be untrue, I’ve learned, thanks to Dr. Rhonda Patrick for sharing a study involving radio-labeled gelatin hydrolysate supplements, which revealed preferential accumulation of the labeled proteins in subjects’ cartilage tissues – indicating absorption and assimilation of the gelatin in high molecular form: Oral Administration of 14C Labeled Gelatin Hydrolysate Leads to an Accumulation of Radioactivity in Cartilage of Mice (C57/BL)

Making the effort to craft a batch of home-made stock is high on my list of Noble Kitchen Pursuits. It does take some effort, but thankfully, I’ve found one thing that makes the job a little easier: pressure cooking in my trusty Instant Pot. When I make broth, my priority is getting the most complete/efficient extraction I can, and higher pressure/temperature in a pressure cooker helps break down your ingredients in less time. The enclosed cooking vessel also preserves volatile compounds from escaping (like they would for hours on an uncovered simmer), resulting in more flavor.

I opt for two rounds of pressure cooking, first two hours for just the bones (with added vinegar), followed by another two hours after adding whatever vegetables I have handy, along with a piece of kombu seaweed for even more minerals and savory umami flavor. After straining, I usually get about 3 quarts of rich, golden broth, which keeps well in the freezer. Stock up! 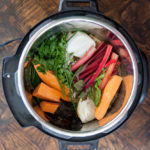 If desired, before pressure-cooking, bones may be roasted in an oven at 400 F until lightly browned to develop flavor. Some also prefer to begin cooking the broth with an uncovered boil, taking a few minutes to skim off any scum that immediately rises to the top. I’ve done this but most often find that very little residue develops.

It was 30 degrees this morning, and warming up to