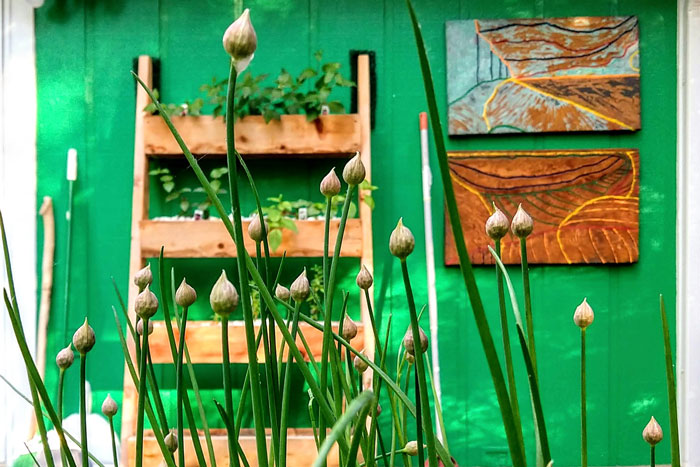 Our planet has made a full trip around the sun since we found our home on Washington’s Olympic Peninsula and moved into our beloved, wild yard. To celebrate the occasion, you’re invited to join me for a photo tour of our first year of progress in cultivating an edible landscape!

We’re still pretty early in our growing season up here, so I don’t have much in the way of actual harvest-ready “fruits” of our labor to show off… but this is my 1-year progress report, and maybe later this year I can follow up with an update on the goods (along the way, you’re likely to see highlights on my Instagram feed).

When we moved in, there was a pitiful quartet of past-their-prime cherry and apple trees in the corner of our lot. They were all under-pruned/over-sized, and yields were very low (minus the fruit that the wildlife helped itself to, last summer/fall we collected 3 apples and a single tiny bowl of cherries). Since last year, we up-righted the apple tree that had fallen sideways, cut down masses of dead branches, applied organic fertilizers and hoped for the best. I’m crossing my fingers that those first steps will help give the old trees a boost, and soon I’m planning to do a little more aggressive summer pruning to inhibit growth and hopefully assist future fruiting.

We also added some new blood to the starter orchard: this spring I was very excited to invite two hazelnut trees to join us! They are Eta and Theta cultivars, late season cross-pollinators developed by a breeding program at Oregon State University.

And last August, when my parents came to see our new home for the first time, they treated us to a new 4-way grafted apple tree (Honeycrisp, Liberty, Spartan & Akane varieties). We planted this one into a mature feature garden that looks like it must have been established in the 60’s when our house was built, but was completely consumed with ivy, creeping myrtle and blackberry brambles. We’ve been working hard to restore this area and it’s still in progress, but watching the new apple tree bloom alongside the collection of old-growth rhododendrons makes it feel like a victory garden already!

For our vegetable gardening, we’ve been taking a gradual approach, trying not to get over-ambitious while we juggled the rest of our first-year fixer-upper tasks. We started with two raised beds (built simply from cedar fence pickets and square posts) flanking our house’s deck, and another two placed in the sunniest space in our yard. The latter two are jam-packed – we’ve planted carrots, beets, butternut squash, corn, peppers, and romanesco, all from seed. They’re joined by a few containers holding tomatoes, potatoes, and dahlia bulbs.

By the deck, we planted one bed with turmeric and ginger roots (I read that it could work for me here in zone 8B, but no action yet… ) and then also sowed it with a surplus of cilantro and sunflower seeds. The containers next to it are sort of a “rescue nursery” of found plants left by past gardeners around the yard, including lemon balm, oregano, chives, and mint among the edibles.

The other deck-bed holds a strawberry patch, featuring the same cultivated ever-bearers that lived on my Seattle balcony-garden, along with some carefully collected and transplanted wildlings.

Wild strawberries? Yes! Strawberry plants are running wild through several corners of my yard, especially in this patch on the edge of the rhododendron garden. We’ve been weeding them and revering them and I hope they will thrive.

One of our ongoing goals has been to encourage native berries to propogate. Blackberries and thimbleberries are endemic on our lot, and we’ve been digging them up from tight spots in paths and flower beds and transplanting them down by the river, where a number of them are already established and we hope we can get them all to spread along the whole slope of the bank. There are a handful of salmonberry plants in the same area, and we also brought 10 each elderberries and serviceberries home from our local conservation society’s annual native plant sale. Go berries go!

Another major goal this year was to plant an asparagus patch. I’ve long dreamt of caring for a perennial bed that would come back with a seasonal crop every year, so I couldn’t wait to get it going ASAP. I set my heart on a spot that ended up taking two weeks longer to dig up than expected, but I got my crowns in the ground by the end of March. The growth has been a little wimpy so far, but I hope after letting them grow undisturbed this season, they’ll come around by this time next year.

Finally, our edible perennial collection was given a head start by one more surprise volunteer back in the rhododendron garden: rhubarb! This cluster popped up at the beginning of spring this year, in a place where we had dug up and torn out a layer of plastic sheeting that a prior homeowner had apparently used to suppress weeds between beds. We can only guess that this rhubarb was planted by an earlier gardener and laid dormant for potentially decades? Welcome back, baby! It grew up into a pretty huge and healthy plant, big enough that I think in the fall I’ll be able to divide it into 4 or 5 pieces to spread out and re-invigorate for a bright future.

It’s been an adventure getting to know this new environment – what a trip! If any seasoned gardeners (especially in similar climates) have insights or advice to share, please do!

One thought on “1 Year in Edible Yardwork”