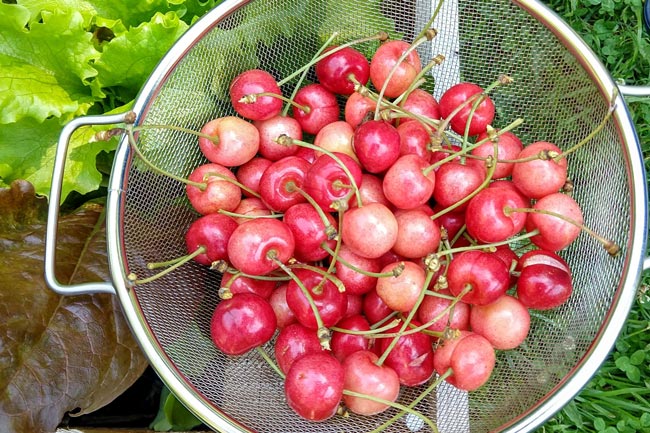 Following up from last year’s post, I wanted to document another quick progress report as we continue to work toward cultivating an edible landscape here in the wild yard of our home in Sequim, WA. This year had its ups and downs, but overall we saw some big improvements in our gardening efforts as we start getting a little more accustomed to the climate!

This spring, we planted six new bare-root fruit trees from our local nurseries: two dwarf Chinese/Mormon apricots, two frost peaches, and two 4-way grafted combination plum trees (featuring stanley, shiro, beauty, mt. royal and blue damson cultivars). Unfortunately, the weather didn’t work in our favor… I think we got a late frost that killed off any blooms on all of these new additions, and on our apple trees too. So not much fruit to enjoy this season, except the old giant cherry tree had a pretty decent year. We picked enough low-hanging fruits to enjoy our first home-grown cherry slab pie – super delicious!

The season has been a lot more productive than last year, especially for the greens. We’ve been eating our home-grown greens nonstop, starting with the mustard in the early season, followed by plenty of collards and spinach, and now still yielding all the lettuces we can eat. Your own fresh greens are so much better than anything you can buy!

The napa cabbages grew more vigorously than I expected; after planting nursery starts in April, they were ready to pick by July. Next time, I would try planting later in the season to avoid the heaviest slug populations… ugh… those jerks destroyed way too much of the poor plants, but I salvaged enough clean hearts to make a quart of my very first home-grown kimchi. Mission accomplished!

The garlic has been an excellent low-maintenance crop – I hadn’t had the best experience with softneck garlic yet, but tried a switch to hardneck when we planted last fall and it grew beautifully for us. An added bonus is the crop of garlic scapes that come before the bulbs – I made those into a big batch of pesto.

Currently, before the season winds down, we’ll be picking our green beans (Kentucky Wonders), beets, carrots, a few little eggplants, a couple volunteer cucumbers (bonus!), and some lingering strawberries. In the past month, we gave up on the strawberries’ previous home next to the deck – just not sunny enough – and post-transplant over here in the garden they’re picking up their pace to give us a few to enjoy before the season ends. Lesson learned. We also let the mustard plants keep going to seed, curious if they will yield enough to make a little batch of mustard to preserve?

The asparagus patch has been a bit of a bummer – in March, I planted a new set of crowns from a more reliable supplier than I used the year before, but still didn’t see strong growth. I hoped this location would be viable, but now I’ve resigned to planning to move the bed closer to the orchard area, which gets more sun and grows very lush grass, so I hope my dream asparagus patch will flourish over there instead. We’re thinking about repurposing the old location as a bed for ostrich ferns; maybe the conditions could work out to give us a little yearly crop of fiddleheads?

I split and transplanted the volunteer rhubarb into a bigger space nearby – it didn’t have a super-strong year compared to last, but I hope it was just adapting to the move and will gain vigor next season. (still working on getting that crazy overgrown rhody garden under control!)

The berry efforts are chugging along! Last year’s transplants seem to be taking well to their new homes. The thimbleberries are winding down now, and soon the blackberry season will finally make its way to my late microclimate. So far so good.

So that’s it for the second annual report! For more edible updates, come follow my Instagram feed and let me know if you have any tips!

It's a magical time in my microclimate on the Olym

from my family to yours - wishing you peace, love,

I love my family 🥰 chicken pot pie topped with

💥🎉 BIG news! I really love my Instant Pot, a

no pie on our Thanksgiving table tonight... becaus